The CPCA annual general meeting was held on March 6th in Toronto in conjunction with the Ontario Petroleum Contractors Association’s annual conference.

In attendance representing their respective provincial associations were CPCA president Marcus Cormier (Alberta), directors Ken Jamieson (Ontario), Louis Rizzetto (Quebec), Margo Middleton (British Columbia), and CPCA administrator Michelle Rae. Thank you to those CPCA Board members that attended, especially to those that travelled from other provinces. Representatives from Saskatchewan and Manitoba were unfortunately unable to attend.

The meeting commenced with each provincial association providing an update on their respective organization. Marcus Cormier reported the Alberta Petroleum Storage System Contractors Association sees very good participation from their members. They are currently working on a best practice for their members with respect to contractor liability.

Louis Rizzetto of the Association des Petroliers Entrepreneurs du Quebec reported they have made a lot of progress with respect to their petroleum mechanic training and certification program. They are working closely with the labour mobility group to ensure the CPCA standard is consistent throughout the process. Anticipated rollout of the program is early 2018.

Margo Middleton of the British Columbia Petroleum Contractors Association reported they are continuing their efforts to build their associations member base, although their focus right now is to continue their work with their provincial industry training authority with respect to their province’s petroleum equipment tradesperson program. Marcus Cormier and Michelle Rae recently met with the group to discuss utilizing CPCA resources for the BC program.

Ken Jamieson of the Ontario Petroleum Contractors Association reported OPCA is working on a course for work on generator systems, it has been a challenge to develop due to the complexities of the code. The Liquid Fuels Handling Code for Ontario has been delayed in being published; it is anticipated it will be released this fall noting there is more alignment with the national code in this latest version. The OPCA will be working with TSSA to develop a code update workshop for license holders.

The OPCA hosted a welcome reception for CPCA on the evening of March 6th. CPCA delegates also joined OPCA members for dinner and entertainment the evening of March 7th. The banquet was well attended with approximately one hundred guests enjoying the festivities of the evening. Master magician Jack Poulin was invited to entertain the crowd. 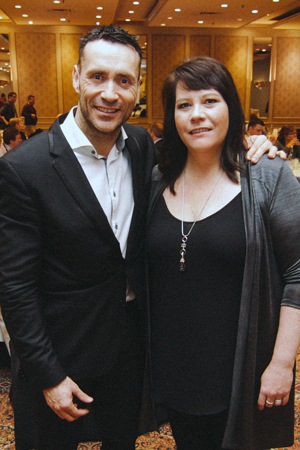 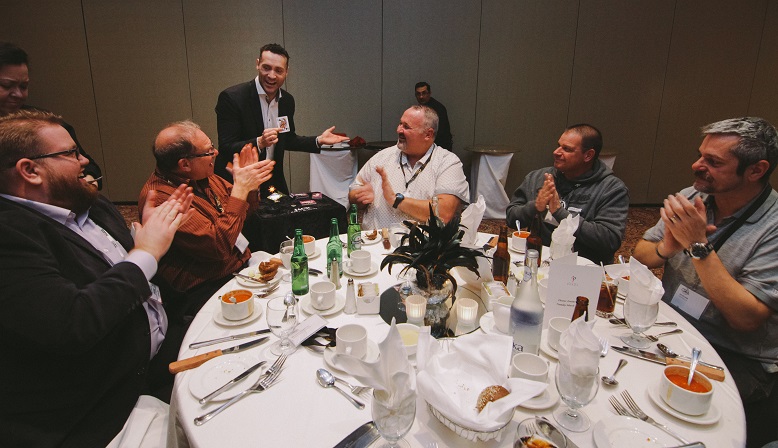 Marcus thanked the OPCA for hosting the CPCA Annual General Meeting on March 6. As OPCA staff manage the day to day operations of CPCA, he thanked Michelle Rae and Donna Riddle for all their work.

The CPCA’s mandate is to promote a standard for Petroleum Mechanic Training and Certification across Canada. He noted special recognition should be given to OPCA for their initial development of a training program for the industry in 1994, the program has come a long way over the years. 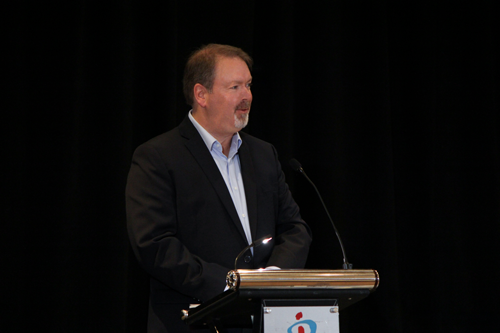 Marcus also noted the CPCA promotes labour mobility through the Agreement on Internal Trade signed by all provinces. Chapter 7 of the Agreement on Internal Trade states workers officially recognized in once province is recognized in all other provinces without the worker being required to undertake any material additional requirements, such as education, training, examination, or assessments.

As discussed at the CPCA annual meeting, Marcus and Michelle Rae recently met with the British Columbia Industry Training Authority to discuss potential harmonization of their and CPCA’s program to facilitate certification and work towards reciprocity.

Marcus congratulated the Association des Entrepreneurs du Quebec on their achievement in working with the Quebec government to establish the Petroleum Mechanic trade and training and certification program in Quebec. 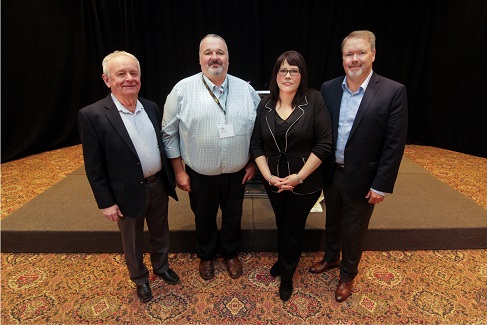 Thank you again to the OPCA for hosting our event, we appreciate all the support received from our member associations. We look forward to our continued collected efforts in promoting our industry across Canada. 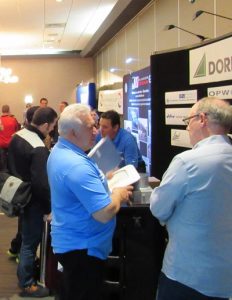 Special guest speaker was David Mason of Canada Brokerlink. Dave has been working with the CPCA on a campaign to help contractors better understand their cost structures and make better decisions about the projects and/or activities that they are willing to undertake to get the best return for the use of their people and capital resources. The tool is especially useful for small contractors who may not evaluate their business on a regular basis.  The CPCA will be publishing the information and the interactive model will be available to members in the coming weeks.

An important mandate for CPCA is to maintain the training and certification program for members across Canada. We now have well over three hundred CPCA licensed individuals, thirty-three of those are new licenses issued over the last year. 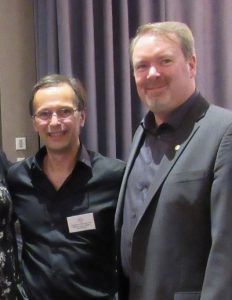 CPCA also launched their learning website in 2015. The site is a companion to the home study course in addition to our study manual and in class review and contains online learning tools such as quizzes and video tutorials.  We believe this form of blended learning – part home study, part online and part classroom improves the engagement for students. It also helps us monitor students progress and completion of the home study course so they come better prepared to the in class review session.

Also as part of our training and certification mandate is to work with officials from the Labour Mobility Coordinating Group to ensure all individuals with a recognized trade and/or certification can work province to province as per the Agreement on Internal Trade.

CPCA President Marcus Cormier commented on the event saying “…This was a first class event.  Thank you too everyone that was involved in organizing it and a special thanks to Jacques Poulin, Myriam Michaud and Michelle Rae for handling all the logistical details.  I know it is not easy to put together an event like this one, but it was well done and the feedback from members was positive.  And thank you to all the CPCA board members who travelled to Quebec City.  I think we had some good conversation during our time there and I’m looking forward to building on our discussions over the coming year.”

Thank you to all for your participation and support, this made our event a great success!!!! 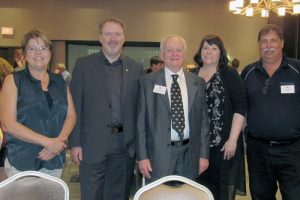 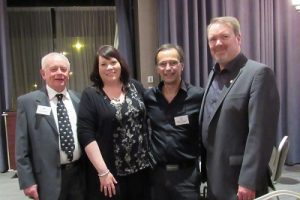 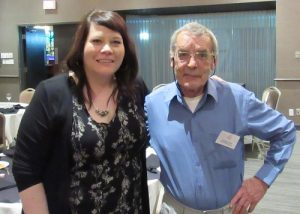 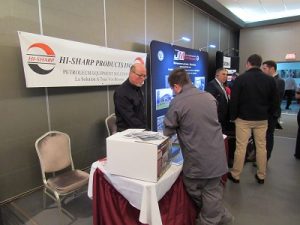 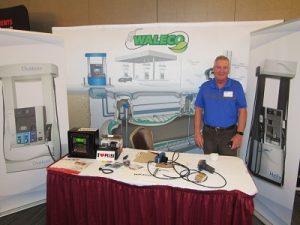 The CPCA 2015 Annual General Meeting was hosted by the Saskatchewan Retail Petroleum Construction Association during their annual AGM & Golf Tournament in Saskatoon on June 1.  The meeting was held at the Parktown Hotel followed by a meet and greet at Finn’s Irish Pub.  The meeting was well attended by CPCA directors including Gord Thompson representing Ontario, Marcus Cormier and Pat White representing Alberta, Rob Bateman representing British Columbia, Mike Seibel and Arlene Wright representing Saskatchewan and Chad Kenwood representing Manitoba. Past Board members Jacques Poulin and Denis Goulet from Quebec were in attendance as special guests. 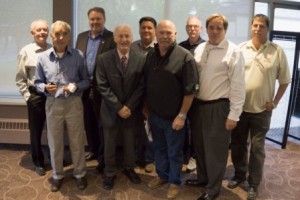 Another special guest attending was Robert Renkes, VP of the Petroleum Equipment Institute, the US equivalent of the CPCA.  Bob was kind enough to travel from Tulsa Oklahoma to attend. Both PEI and CPCA are keen on further building the relationship between the two organizations and discussing ways to further serve our respective membership. Bob also shared information on various member surveys they conduct throughout the year in part to assist CPCA in developing similar survey for its members.

There were also number of attendees from the SRPCA including Randy Iverson from River Consulting, Alex Tsamis from Franklin Fueling, and Kishor Parmar from Elgon Ltd.

Michelle Rae made a presentation to the group on the new CPCA learning website. The new site was created for students taking the CPCA Petroleum Mechanic home study course and includes additional resources and video tutorials to compliment the self study material. The site also includes management capabilities for CPCA administration including course completion notification , student progress reports, organizing classes and sending feedback to instructors.

A special presentation was made to Jacques Poulin and Denis Goulet for their work in promoting the CPCA training program and lobbying certification in Quebec. The Quebec petroleum contractors association, AEPQ joined the CPCA in the beginning of 2004.  At that time, AEPQ President Jacques Poulin and director Denis Goulet joined the CPCA Board as representatives.  Both noting their association has been working towards trade recognition for the petroleum industry and was impressed with the CPCA’s program.

Since then, both Jacques and Denis worked tirelessly meeting with various regulatory bodies in Quebec including the Ministry of Labour, Ministry of Natural Resources, Trade Certification commission (CCQ), and the construction commission.

With their retirement from AEPQ, Jacques and Denis passed the torch to Guy Rochon and Louis Rizzetto who have worked to maintain momentum on these lobbying efforts. Finally in the fall of 2013, the CPCA and AEPQ met with representatives with Emploi Quebec who did show interest in the program.

While there is still a lot of work to do, no one can deny the work and endless meetings Jacques and Denis participated in on AEPQ’s behalf to recognize the trade and adopt the CPCA training model and the CPCA didn’t want these efforts to go unnoticed.

The awards chosen for Jacques and Denis depicted an Inukshuk – an eternal symbol of the importance of communication and teamwork. Chosen as the symbol of the 2010 Winter Olympics in 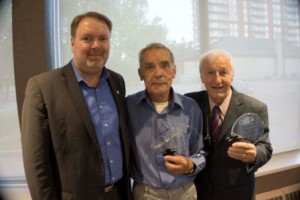