CPCA evolved from a grass roots movement initiated within APSSCA. At conception, the association was challenged with organizing and maintaining a training and certification program with minimal demand. Concerns were also expressed with the lack of involvement and input in many of the occupational, provincial and national regulatory changes. Unannounced, new regulations as well as regulatory shortcomings were impacting the membership.

Initially, a western, regional association was discussed. This quickly evolved into a national concept, once other parties became interested and recognized the benefits. The momentum increased after an open panel discussion was held during the annual APSSCA conference in Feb. 2001. Conference delegates, various provincial regulatory and contractor associations representatives, participated in the debate and concluded a national association would be beneficial to the stakeholders including the public, industryand government.

The June meeting, the second for CPCA, was held for the purpose of developing the organization’s executive, charter and other related business. Membership in the association is available to Active and Associate members. Active membership is available to provincial/regional contractor associations, whose members are actively involved in the installation, removal, maintenance and inspection/testing of storage tank and delivery systems. Organizations, businesses, agencies, and others, related to the Active members activities, are invited to become associate members.

The objectives CPCA continue to maintain include: federal representation, a national training and certification standard, trades recognition, harmonization of regulations and membership programs including an insurance program.

Today, the CPCA also includes involvement from the BCPCA (British Columbia), MPCA (Manitoba) and AEPQ (Quebec).  Initial discussions have also been held with representatives and contractors from the Atlantic region.

There are no ads matching your search criteria. 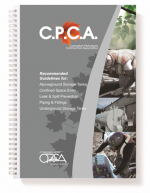